I was born and raised in Tampa, Florida, where I went through K-12 in public education. I studied aerospace engineering at the U.S. Naval Academy in Annapolis, Maryland.

Navy service.  I served as a Surface Warfare Officer in the Navy on surface ships spending time in Newport, Rhode Island, and San Diego, California, including two deployments across the Pacific Ocean to the Middle East.  In 10 years, I experienced many remarkable things: internship at Kennedy Space Center; Army Airborne school in Ft. Benning, Georgia; one of the first two women integrating a U.S. warship; immediate leadership of a division of sailors; and the trust placed in me, after extensive qualifications, at 23 years old to be the Officer of the Deck (OOD) of a $1B warship with 320 sailors, 2 aircraft, and all missiles and munitions embarked. Perhaps my favorite position in the Navy was as Engineering Officer of the Watch (EOOW).  The EOOW reports to the OOD on the condition of the engineering plant, and is responsible to lead in the case of engineering casualty. The watch teams would practice all ranges of casualty drills. An inspection team would come onboard the ship and put watch sections through the paces, one casualty after another, and the EOOW and all members of the team – located in 2 main space engine rooms and an aft generator room – would rapidly respond, having memorized the steps for each type of casualty. It was thrilling; the teamwork, the knowledge of systems, the success, and sometimes the error…but always the teamwork, focused on a common mission.

Building experience.  I entered the building industry upon leaving the Navy. I returned to Tampa and with my interest in engineering and my leadership and management experience as a ship officer, I joined The Beck Group and earned my General Contractors license.  My first project was as Assistant Project Manager on Tampa International Airport’s Airside C: the Southwest Airlines terminal, the first terminal designed post-9/11; a game-changer in the needs of commercial aviation.  315,000sf, $72M, multiple stakeholders; certainly an exceptional opportunity to cut my teeth in a new industry.  After Airside C, it was the 7-story Rental Car Garage at Tampa Airport.  That may sound boring after a 16-gate aviation terminal, but this garage was shoe-horned inside of the airport’s parkway and shaped like a French curve…beautiful; deck edges poured just-so and precast panels shaped just-so.  200,000sf, $35M.  I then went down to South Florida and built retail and pharmaceutical projects.

MBA, Family, The Dali Museum.  Not long after returning to Tampa, I was accepted to Harvard University, but chose to stay in Tampa, and earned an MBA at USF St Petersburg.  This proved a fateful decision as I met my husband, Hank Hine, while I was in that MBA program, and several years later, in addition to creating our family, I very much enjoyed being an un-paid, yet often engaged and highly appreciated behind-the-scenes participant in the dreaming, designing, building and opening of The Dali Museum in St. Petersburg. (My husband is the executive director of The Dali Museum, the most visited museum in the Southeast United States.)

The James Museum / James RE LLC.  In the fall of 2015, I was hired by Tom and Mary James to lead the effort of designing and building The James Museum of Western and Wildlife Art in downtown St. Petersburg. Tom is the Chairman Emeritus of Raymond James Financial, a Fortune 500 firm. He and Mary have been collecting Western & Wildlife art for 50 years and decided to establish a museum in his hometown. This is a $65M, 133,000sf urban mixed-use redevelopment project that includes 89,000sf of museum space and 44,000sf of lease space: office, retail and restaurant.  For the museum, I lead the early programming sessions; city development meetings and negotiations; interviews, selection and contracts with architects and builders; GMP negotiations; and all aspects of design and construction. The museum opened in March 2018.  For the James RE commercial space, I manage our leasing agents, negotiate potential deals, lead the LOI and lease process, then oversee through tenant opening.

In the summer of 2019, founding Chairman of The James Museum, Tom James, asked me to be the executive director of the museum, saying that over the years working together, he knew that I “have good business sense, good common sense, and am good with people; that [I] could lead anywhere.” I became executive director in September 2019 and am very proud, eager and confident serving with the team at The James Museum. We have a bright future.

Public Education. In 2015 when our first child was in preschool at the private prep school in our area, we would drive every day past a small public school called North Shore Elementary and I would ask myself, “Why don’t we go there? Why doesn’t everyone go there?” The school was a Title I, “D” school. This lead to a great deal of my asking questions and learning about the quagmire that is School Choice, then to my being the founding president of Friends of North Shore Elementary, a nonprofit that believes that strong traditional public schools are vital to our communities, vital to our democracy, and that education can be and must be great for all students. In our first year we held monthly meetings at our home, held open public forums at the school, and asked and answered many questions. Our son started Kindergarten at North Shore in 2016. I became president of the PTA in 2017, serving for two school years. We have created an after school program with 16 unique programs like Spanish, Yoga, Garden, Soccer, Dance and more, then provided scholarships and a bus home. We provide teacher professional development funds and classroom support as well as open arms for teacher requests and ideas. Thriving teachers = Thriving classrooms. We increased fundraising six-fold from $18,000 to $115,000. We have created community among families of all backgrounds and teachers and staff. That is democracy. I and many others have worked tirelessly and within 2 years, we increased Kindergarten enrollment at North Shore by 20% and our grade to a “C”. North Shore is thriving. With this work on solid ground, I hope to bring the experience gained and lessons learned district-wide and beyond.

I love to work with people bringing a vision for a better place to life.  It takes leadership, teamwork, and focus on a common mission.  I thrive in this kind of environment.

Personal.  We have 2 young children; Stuart born in 2011, and Garrett born in 2014; and two grown children, Grace and Henri. We are an active family and an active couple and very much enjoy all that the Tampa-St Petersburg-Sarasota region has to offer, as well as the broader U.S. and world.

We hope to participate in making the world a better place, for all people. 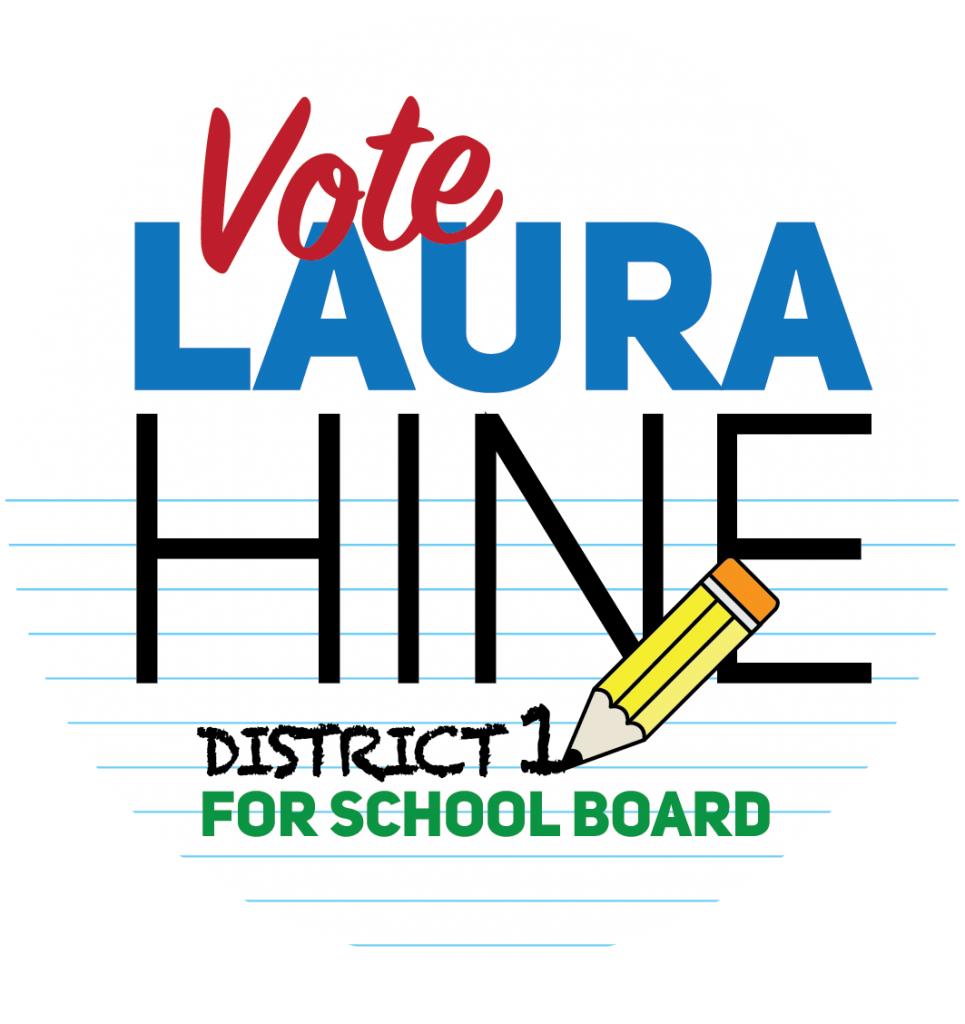 Political advertisement paid for and approved by Laura Hine, non-partisan, for Pinellas County School Board, District 1.